April 18, 2012
I needed some birthday cards and decided it might be fun to try using white crayon for the design-- I don't know if I'll be doing that again. It was really hard to see when I was drawing (go figure) but also when I painted over it. I ended up having to go over all the lines with a wet brush to lift the paint off. When I still wasn't satisfied, I just painted over a lot of the crayon lines with white paint.

The first card is for my friend Whitney (she'll probably be disappointed that I didn't use her favorite colors: blue, black, and silver, but those aren't really girly birthday colors). 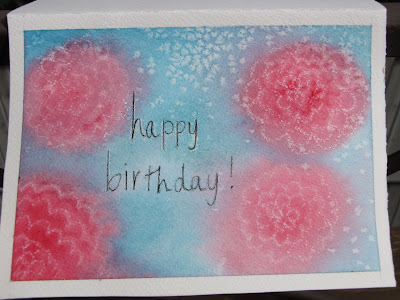 This is card before I added white paint. 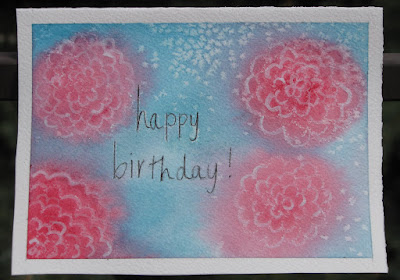 The flowers just weren't standing out enough, so I retraced them with white paint. Also, I wrote happy birthday with crayon, but it wasn't really visible when I painted over it, so I just wrote over it with a black pen. I don't mind it. The message is off center, but that doesn't bother me either.

My brother, Thomas, is in Brazil and his birthday is May 8th.I need to get a card in the mail for him soon if I want it to get there on time! This is his card: 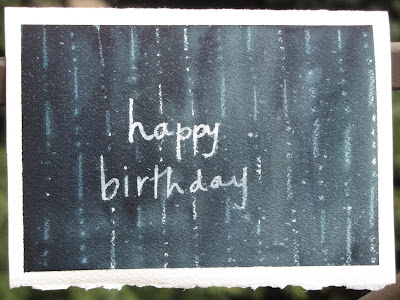 It's a little dark for a birthday card, I know. After making Whitney's card, I thought that the crayon would show up better if I used a darker color, and it did. Then I decided that the first wash wasn't vibrant enough and did a second wash. As a result, the crayon didn't stand out nearly as much and I had to retrace the message with white paint. I splattered some white paint with a toothbrush because I like how it looks with darker colors.

I think in the future I'll just use masque pen for things like this. It's easier to see when you put it on the paper and will keep everything really white so I won't have to go over it with white paint.

Popular posts from this blog

Doodles from my Journal

March 07, 2012
I've been doodling for a couple of days now and I've really enjoyed it. It sure helps pass the time at work and I like to see what I come up with. Here are a few pictures from my art journal. They will all eventually be painted.

October 23, 2017
I got a new handmade watercolor pallet from Designs by Rachel Beth on Etsy and I couldn't wait to try it. I'm pretty excited about how this one turned out-- especially the yellow rose shape. That one didn't turn out so great the last time I tried it. I think using a smaller brush helped.

Emilee
I love to paint. The purpose of my blog is to document the development of my paintings and creative adventures (and sometimes misadventures).